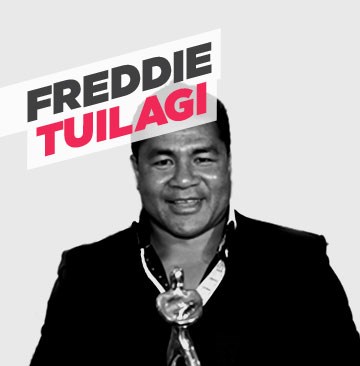 Freddie played rugby league for Halifax and St Helens winning the Super League Title for them before switching codes to play in the Premiership for Cardiff Blues, Castres and most famously, for Leicester Tigers with whom he won the European Cup and started the now world famous Tuilagi dynasty as he bought his younger brothers Henry, Alesana and Manu to Leicester Tigers and his son Freddie junior. As an International player Freddie represented Samoa from 1991 to 1995 and played in the quarter final against eventual winners, South Africa.
Since retiring from the game he continues to have an impact on the game via his sports management agency, Global Bro Sports, which has hundreds of professional league and union players under management. Freddie maintains his passion for the game and supports grass roots rugby via Tuilagi Skills Rugby camps for young players and viahis prolific support for charities such as the Matt Hampson Foundation.
Come along on Thursday 26th and network with other local businesses over an informal lunch whilst learning from one of the game’s greats.
Book via the link below, all welcome, £25 per attendee.
https://www.eventbrite.co.uk/e/oxford-harlequins-business-club-lunch-with-freddie-tuilagi-tickets-97091253553?ref=eios
Tweet
Tweets by @oxfordquins